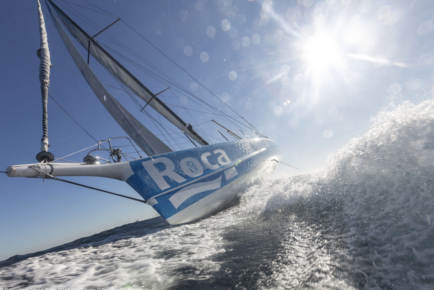 The Barcelona Oceanic Navigation Foundation (FNOB) and the We Are Water Foundation have reached an agreement to again participate in the latest edition of the Barcelona World Race, with the sponsorship of the boat captained by Bruno and Willy Garcia, which will carry a message to raise awareness about the lack of water and sanitation around the world.

This will be the second time that the We Are Water Foundation participates in the two-occupant, non-stop, round-the-world regatta, since they sponsored the Jaume Mumbrú and Cali Sanmartí team in the last edition.

Xavier Torras, the We Are Water Foundation Director, underlined "the special excitement that drives us to be a part of this adventure again, four years after our first time. For these four years, we have been working in the most disadvantaged places on the planet, carrying out over 20 aid projects. And it is especially important to reach people with our message about the problems the lack of water and sanitation is causing almost a third of the world's population. Which is why we are convinced that Bruno and Willy Garcia will help us, with this boat, to take our message of solidarity around the world".

Bruno Garcia, a cardiologist by profession, has also expressed his enthusiasm about what it means to both of them to be able to cooperate with We Are Water, since "it represents the possibility to fulfill the dream of circumnavigating the globe, and do it with my little brother, Willy, and do it on a boat loaded with messages in favor of fair distribution of water throughout the world".

In the 2014/2015 Barcelona World Race, that starts in their home town on the 31st of December, Bruno and Willy will compete together aboard the IMOCA 60 We Are Water to try and make their shared dream come true: sail around the world.